Holacracy: Is this the logical step for the evolution of the organization?

There is quite some buzz about a specific organizational governance approach these days – the “Holacracy” model. This week Zappos announced the implementation of this model and now the expert community is arguing about the pros and cons of the approach. Especially as it is labeled to “replace today’s top-down predict-and-control paradigm with a new way of achieving control by distributing power” the Holacracy model seems to be the organizational approach the social enterprise community is asking for so long. It seems to be somehow a logical next step, but we’re not quite there yet.

For most companies a Holocracy is either a very scary or a very unobtainable model. Let me explain.

Holacracy – the governance model for a Holarchy!

So, what is a Holacracy? In a nutshell, it is a governance approach for a purpose driven structure where tasks are defined in service of that purpose. People serve the purpose and themselves.

In essence, it is based on the concept of self-directed work teams. By eliminating the conventional structure (no managers, no job titles, no hierarchy) and placing people in self-governing circles, a company is said to become increasingly agile, efficient and innovative. Accountability falls directly to the person responsible for the task, and there is nowhere to hide due to the (extreme) transparency.

The idea is similar to a command-and-control structure which is fed by its business objectives.

By the words of Brian Robertson:

“The root of the word “Holacracy” is holarchy. Holacracy is governance (-ocracy) of the holacracy (hola-), and a holarchy is a hierarchy of increasing wholeness or increasing embrace, where each layer is a whole autonomous entity in its own right, and yet part of a larger whole. Like, for example, our human body is one great example of a holarchy. We have cells, and each cell is autonomous. It’s not just directed and controlled from the outside. It has its own governance process, a regulation process; it has its own boundary, and it’s an autonomous entity. And yet it’s also part of an organ. And our organs themselves are whole autonomous units with their own functions, and yet they’re part of our whole system.”

So in the Holacracy everybody is a part and the whole of the company, a holon. Eliminating top and bottom or left and right entirely.

The way I see it, you need quite an open minded, flexible and progressive working culture to even think about such a change.

Zappos tries to enforce its evolution in a holocratic way!

The idea behind this transformation is not to bog the company down in bureaucracy. This is done by creating ultimate transparency.

The holocratic approach has been around for quite some time though, and Zappos is not the first to implement its governance derivative, the Holacracy. Although, they are the biggest yet. The announcement has stirred up quite some discussions – while the whole “future of work” community is very much enthusiastic about this move, there are also some ressentiments in regards to the approach:

Business Insiders’ Alison Griswold is refering to Jan Klein, a senior lecturer at the MIT Sloan School of Management and pointing out the following issue:

People just didn’t self-regulate as well as the companies had hoped. Teams weren’t good at disciplining themselves either. ”We’re human beings; we just don’t do that,” Klein says. “We’re social beings, and social issues get in the way of logic sometimes.”

I would argue that a Holacracy is the ultimate form of a Social Business. It is what we aim to achieve in its purest form. And in regards to the mentioned pitfalls it might even be the supporting, collaborative technology that is now the missing link for the organizational approach.

In the search for the truth about the Holacracy model

As I am not the expert on organizational design models I have asked a few friends for their take on Holacracy idea..

“Over the next decade or so there will be more initiatives such as this one .. maybe even many more.  It’s likely that a few will work well, some will work well enough to maintain momentum and progress and that many will struggle or fail.

What is certain is that the Web, networks, software and apps and mobile devices won’t go away.  The choices and possibilities will only increase.  It creates a challenge that involves fundamental technological, social and business logic, decisions and dynamics, and must account for fluidity and persistent change.

Holacracy is an branded approach to seeking and shaping coherence in this environment, and is based on several core OD principles about inclusion, participation, and decentralization of accountability.

It is one example of design constraints derived from established organizational behaviour principles.  There will be more … there will be an ongoing search for approaches or methods for bringing or extracting productive coherence from the waves of information flows and mediated human interaction that increasingly characterizes today’s working environment.

Whatever emerges from this search and becomes more widely accepted needs to be based on a foundational set of assumptions about what are the consistent elements of effective organizing-for-purpose-and-productivity in a networked era.  And the famous ROI question .. it will eventually need to demonstrate tangible benefit and value.”

Research and experience show that organizations need different structures and governance models at various points of their life. Those needs are fairly predictable in a stable world, but are emergent in a volatile, networked business environment, like the one we’re in now.

Holacracy is likely to be a viable model for some organizations at certain points in their existence, particularly fast-growing small businesses. However, it is not likely to be a beneficial rip-and-replace alternative to traditional hierarchy in most existing large organizations.

I think Holacracy is an interesting model that provides a structural template for organisations wanting to try manager-free working but don’t know how to begin. It is no surprise, then, that is it the go-to model for firms like Medium and Zappos.

However, it is a complicated and in some ways quite demanding model when fully applied and I think organisations should ideally take what works works for them and make it their own rather than obsess about full compliance with the model. In that way it reminds me of agile, which if implemented in an overly-ideological way ends up favouring those who know the ‘system’ and can become slightly ridiculous.

There are other aspects of how people can collaborate and get work done in an environment with E2.0 or social business platforms that are not strictly part of the model, and I think these are also worthy of consideration, but what Holacracy seems to get right is the pure focus on tasks and resolving tensions that get in the way of their fulfilment, which I find refreshing compared to models of bureaucratic management.

There is a wealth of new thinking around about radical management, new thinking on organisational design and culture and other areas, and it will be interesting to see how existing large firms attempt (or not!) to use this, as well as these ideas providing a new set of templates for companies just starting out on their journey.

Lee will also provide his input at the conference on the session  about Defining the Leadership Model and Design of the 21st Century Organisation - together with Bernard Marie Chiquet, a certified Holacracy coach from Paris. Therefore I am very much looking forward on this!

During the Enterprise 2.0 SUMMIT there will be a lot of attention to facilitating change with the aid of social. A goal is to bring social into the fold, making it an integral part of the corporate structure, fully supported by the boardroom. Not something that happens on the sideline, run by enthusiasts and Corporate Rebels in their down time.

By any reckoning, a business cannot simply jump from an old school top down hierarchical culture to a full on Holacracy. There have to be some steps in the (very big) middle. This is Social Business as we know it now.

The future will tell if this is for the few or for the many. In my opinion, we’re not there yet.
What are your thoughts on Holocracy?

13 thoughts on “Holacracy: Is this the logical step for the evolution of the organization?” 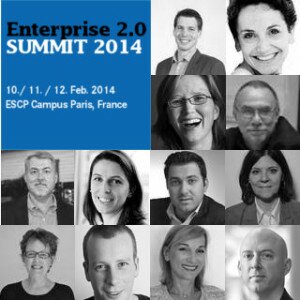 On the way to a social business analytics framework!

Enterprise 2.0 – an evolution or revolution of the organisation